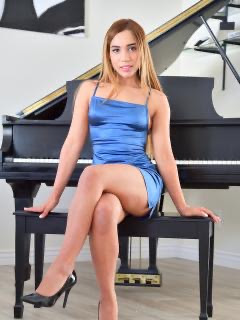 Brenda was a world renowned piano player and had performed at some of the biggest music halls in the world but she was approaching her 80th birthday and she was getting worried as she was finding it hard to play the piano her body had aged badly and her fingers were getting very bad arthritis, Brenda did not want to stop playing she wished she was young again, after speaking to Robert her manager she made a joke about becoming younger again and Robert smiled and sat forward and spoke.
“You know what Brenda I think that’s possible, but it could be risky” Robert stood up and walked around to her.
“I can’t becoming younger Robert I wish I could....” Robert interrupted her and laughed.
“Not making you younger, swapping you with a younger body” Brenda looked at Robert and smiled
“Is it possible ?” Said Brenda
“You leave it with me” Said Robert
3 weeks later Robert was in his home hoping to get new financial backing for his new found young talent.
The girl played the piano and then when she finished she turned around and smiled at the people who were applauding her
“She reminds me of a younger Brenda Matthews you know” said one of then girls watching
“Yes she is like a younger version” said another
Brenda and Robert laughed with each other after and had some champagne, Brenda loved her new young body and was so happy to carry on doing what she loved.
Posted by Swapperdudetg at 00:19