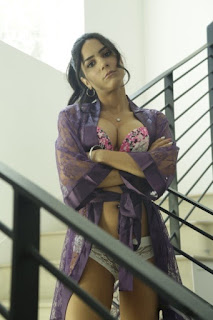 Curtis was sitting there in the front room when he looked up to see his wife Karen walking down the stairs dressed in some very sexy lingerie.
“Wow babe you look amazing, So Sexy....” but then Curtis saw Karen holding the swap device a very rare device which she inherited from her grandmother.
“No....No.....No....Not again, I’m not swapping again....no” but Karen pointed the device at Curtis a next thing her knew he was standing on the stairs in Karen’s body.
“No.......Karen swap us back how does this device work....come on.....” Curtis pushed some buttons but nothing happened. Karen looked up and her body and smiled at Curtis and spoke.
“Look Curtis, I’ve got a boner”
A very unimpressed Curtis looked outraged he folded his wife’s arms in anger as Karen started walking towards him.
Curtis laid there as he watched his own body go down on his new female equipment, it was a strange feeling, and after they had made love they both laid there....
“I have to admit Karen, that was not bad....not saying I want to do it again.....but” Karen smiled at Curtis and spoke.
“You like your own penis, and what I can do with it......If you take care of this morning wood I will swap us back”
“Your Kidding” said Curtis
Karen shock her head a pushed Curtis down under the covers.
Posted by Swapperdudetg at 23:04