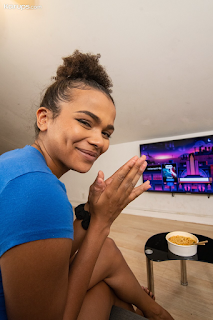 Vincent was so happy he had a night in by himself in his roommates body, Vincent and his roommate Silvia swapped bodies after a prototype body swap machine went off by accident in a local lab most of the east side of town were now in other peoples bodies while they fixed the machine.

Vincent cooked some food and then put on the tv a rubbed his hands together.

“I think I will watch Star Wars, eat my food and then maybe a cheeky little play with my new body before bed, so glad Silvia decided to go and see her friend tonight” Vincent grabbed Silvia’s boobs and laughed.

Picking up the remote he turned on the movie and started eating and drinking…..

30 minutes in to the film Vincent had eaten his food, drunk his beer and was unable to wait for the movie to end before he was naked on the sofa fingers deep in his new pussy, What A Night In he thought as he screamed out as a orgasm hit his body.