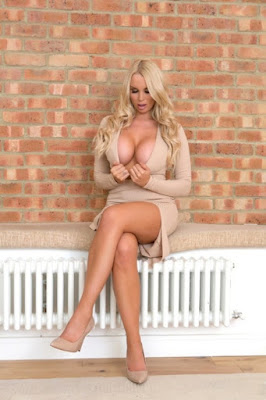 “You want to swap bodies ?” Laughed Elliot as he looked at Debbie his very attractive next door neighbour who he was hoping had invited him over for some fun, Debbie sat down and looked at Elliot as he carried on laughing.
Debbie smiled at Elliot and then said
“Don’t believe me…..”
“Oh My……” said Elliot as next thing he looked down to see a pair of boobs busting out of the very revealing top Debbie was wearing.
“Your not laughing now” said Debbie as she watched a shocked Elliot fondle her boobs and explore other parts of her body.
“Oh my you were telling the truth this is mental…..I have boobs and a pussy….” Elliot stopped talking as a hand started feeling the empty void between his new smooth legs.
Debbie watched for a while as Elliot looked into the mirror at his body every now and again he would look back at Debbie and then back at his reflection.
“So what do you think, fancy staying like this for a couple of days ?”said Debbie
“Errr……okay……yeah….” Stuttered Elliot
“But why would you want to be me ?” Asked Elliot as he tried to walk forward and stumbled due to the high heels he was now wearing.
“No reason really I just enjoy trying out different bodies I spent last week as Elaine but other than my ex husband I haven’t really tried guys body.”
“Wow really that’s mad, Elaine she’s cute so what I just live your life for a couple of days.”
“Yup just enjoy the next couple of days in your body” said Debbie
Elliot watched as Debbie left in his body leaving him in a big house with a female body, maybe a shower or a nice bath as he needed to explore this body….
Posted by Swapperdudetg at 20:40