Put A Baby In My Daughter 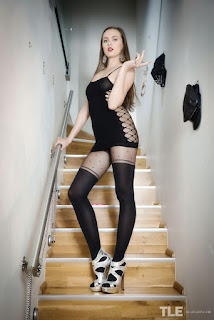 Cheryl was so pissed at her daughter Hayley when she heard from Aaron Hayley’s husband that she had decided after 5 years of marriage that she did not want to have a baby, Cheryl was so upset she wanted grandchildren so she decided to act but she could not really see how she could get her daughter pregnant.
Weeks later Cheryl had a idea she would swap bodies with Hayley and then get her pregnant all she had to do was dress up and seduce Aaron into having sex, simple really she thought as she picked up the phone to call a friend who knew a way of swapping bodies.
Cheryl knew it was a little odd as she looked into the mirror at her daughters face her own body was asleep and locked in the guess bedroom deciding to drug her own body before the swap as Hayley would freak if she woke up in her mother’s body staring but one day Hayley would understand why she did what she did, Cheryl of course knew her daughter was a very attractive woman but as she started looking at her body she realised that she had not looked this young and beautiful in years.
Cheryl was all dressed up waiting for Aaron to return home from work she stood there on the stairs dressed to impress and as Aaron entered the house he looked up and smiled.
“Babe you look amazing….” Said Aaron
But before he could utter another word Cheryl was kissing him and pulling him up the stairs to the bedroom as they entered and Aaron throw his wife onto the bed he opened the top draw of the dresser and picked up a condom.
“No…no…..no….. my love I want you to put a baby in me…..” said Cheryl as she spread her daughters leg.
Laying there after what was hands down the best sex Cheryl had ever experienced in her life Aaron rolled over and put his hand on his wife stomach.
“I think we may of made a baby” said Aaron.
Cheryl was hoping they had not made a baby, last night was amazing and she would not mind maybe having sex again with Aaron is this young body, maybe in the morning she thought as Aaron held her in his arms.
Posted by Swapperdudetg at 22:58